We are active in the field of satellite navigation since many years and can draw on extensive system level knowledge as well as practical experience in many appplication areas. For augmentation systems in world-wide use we develop subsystems for the respective ground infrastructure.

EGNOS is a European augmentation system designed to improve the quality of GPS navigation. The current GPS signals are continuously monitored by a network of reference stations deployed over Europe. A central processing facility collects all data and calculates corrections and integrity information. This information is broadcast to the users via comunication satellites on the GPS frequency. The uplink of the signals is performed by several EGNOS Navigation Land Earth Stations (NLES). f.u.n.k.e. AVIONICS has been involved in the development of NLES equipment and test facilities since the year 2000. In the years 2011 until 2013 we developed the Integrity Box and the RF Payload Simulator for the second generation of the NLES which is in operational service in the meantime. These developments were performed on the basis of detailed customer specifications and following tailored ESA development processes. We support the operation of our equipment through long-term maintenance agreements at least until 2022. 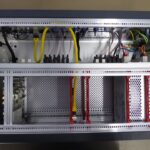 In early 2018 f.u.n.k.e. AVIONICS GmbH signed a contract with Thales Alenia Space France (TAS-F) to supply subsystems for the Uplink Station (KUS) in the frame of the South Korean Augmentation Satellite System (KASS) which is currently realised by Thales Alenia Space.

Development of the subsystems was now concluded and respective units were delivered to TAS-F.

Developed under TAS-F Design Authority, which owns the IPR, the KUS SGS Signal Generator (SG) is part of the KASS Uplink Station as well. The main function of the SG is to generate the L1 and L5 RF signals which are used for uplink of SBAS correction data to the GEO stationary satellite. The code and carrier phases of these signals have to be steered for time synchronization and compensation of signal propagation effects.

The project covered the development of the complete hardware. The data processing was implemented on a FPGA. The specification, design and verification was conducted according to design assurance levels B (DAL-B) requirements. Detailed qualitative and quantitative analyses for reliability, availability, maintainability and safety (RAMS) have been performed. This included Failure Mode and Effects and Criticality Analysis (FMECA), Fault Tree Analyses (FTA) and Mean Time between Failures (MTBF) calculations.

WIth this project f.u.n.k.e. AVIONICS has shown its profound know-how and experience in developing challenging technical subsystems according to customers specifications. The resulting SIgnal Generator, in particular, is indeed the first European Signal Generator to enter the world of Satellite Based Augmentation Systems.